Thankful For Our Veterans

November is the time of year when we reflect on all we are thankful for, so it seems fitting that we celebrate our Veteran’s and their service to our Country this month as well.

This year, the Four Lakes Veterans Organization, led by Commander Joel Fleischman, hosted a touching ceremony paying tribute to all Veterans both Past & Present in the community’s clubhouse. Individual flags were presented to those who lost their loved ones this year that were members of the organization. It was a meaningful tribute that was felt by everyone in the room. 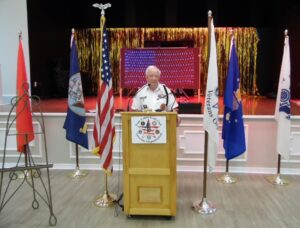 After the opening remarks, all in attendance rose for our National Anthem which was followed by a poem titled “The Noble and The Brave” read by longtime resident, Donna Bragdon. Veterans Mike Fox & Bob Dinklocker presented the folding of the American Flag while reciting the meaning behind each of the 13 folds.

Perhaps the most humbling moment to the ceremony was when a folded flag was presented to each of the Honored Guests. As the name of their spouse was announced, a bell rang between each Veteran’s name. It was a beautiful goodbye and reminder of who they were to not only their friends and family here at Four Lakes, but also their country. 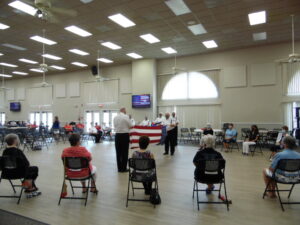 The ceremony closed with Taps followed by “God Bless America”. It’s important to take a moment, even if just quietly alone, to contemplate the gratitude and debt we owe our veterans for allowing us to live freely in the greatest nation on Earth. If nothing else, Veterans Day, should remind us that freedom isn’t free and that maintaining our freedom has required the sacrifice of millions of our fellow Americans who have placed their lives on the line to preserve our ideals and our way of life.

We are thankful not only today, not only this month, but forever for your service.

We strive to provide the very best in Florida retirement, and we do that by keeping you in the know. Sign up below to be added to our Email newsletter! Receive updates on our current promotions, reduced price homes, and upcoming events! 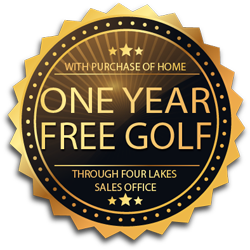